The “Heights of Roslyn” – The Best In Landscape Design 2011 Award Winner! 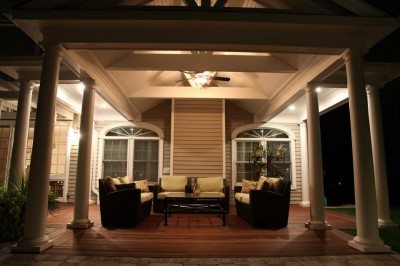 Green Island Design has recently received an award for The Best In Landscape Design by the Long Island Landscape & Nursery Assocation for this project in Roslyn, NY!

We were commissioned for this residential project in Roslyn, New York as the owner needed to expand the usability of the rear yard. The objectives were as follows:

To fully appreciate the complexity of our design, it is important to note that the property was located on top of a large hill which continued to ascend past the property line. Construction access and material staging were a challenge, especially when dealing with the soggy conditions.  The hill in the rear yard was terraced and retained by a series of walls constructed with a dated material. The existing concrete wall system measured approx. 4’-0” from grade. The next tier was set approx. 2’-0” above the top of the initial wall and measured approx. 5’-0” from grade. The remainder of the hill was retained solely by the root system of the existing plant material. We identified early on that drainage would be a major concern due to the entire site being pitched back towards the house, and the presence of heavy clay soil.

The homeowner’s request for a focal point and the existing site conditions spawned the concept of a naturalistic pondless waterfall that would navigate its way from the top of the 20′ vertical slope down to the patio level. This had to be well-executed artistically and structurally, as the existing retaining walls needed to remain in place. In order to feed the water up 20′ and back 30′ we could not undermine the walls by burrowing underneath the base with plumbing. The decision was made to rebuild the face of each wall with a new material that would not only enhance the walls aesthetically, but also provide a crucial gap in-between the walls where we could conceal our plumbing lines. Bluestone wallstone was meticulously milled and stacked in a tight fashion, then reinforced periodically with mortar along the backside. This provided the necessary strength as well as places for runoff to leach through, reducing hydrostatic pressure.

We realized that the basin of the waterfall would need to be extremely large to serve as a reservoir for all the water in the system. In order to increase the water capacity, we designed this feature with intermittent shallow pools that would collect the water so the system would not fully drain when not in use. These pools allowed us to drastically change the flow pattern of the water by reducing its speed when entering the pools, allowing the water to be moved horizontally as well as vertically down the slope. French drains were also incorporated into the 12” gap between the existing walls and bluestone walls and then tied into a drywell. Aqua Boxes were used in the basin to increase the capacity of the system. A high-powered submersible pump, housed in an accessible “Snorkel,” was hardwired-in — and controls the system from a switch inside the house. Check valves were installed along with irrigation feeds that serve as an auto-fill when the system loses water due to evaporation.

Each weir of the waterfall is designed to be seen from a different vantage point. One idyllic view is from a covered sitting area that is attached to the house. The 17′ x 23.6′ structure is a grand space similar to that of a Great Room and is centered on an existing fireplace. The rooflines are dramatic, and gracefully blend into the house. Fiberglass columns, set on 8’-0” depth concrete pilings, frame different picturesque views of the backyard. The sheltered outdoor sofas sit atop a mahogany floor set on sleepers to allow for drainage below. More catch basins are positioned in the lawn area around the space and connected by a French drain tied into a drywell. The outdoor fan and decorative copper cupola add functional as well as architectural details.

A tumbled paver patio sweeps one into a sunnier entertaining space where inviting chaise lounges await in front of the waterfall. This patio was set on a 6” depth RCA base in order to increase the drainage potential of the space.

Rolling the 16’-8” x 8’-0” x 4’-6” Swim Spa into this small backyard was a tight squeeze as the unit had to go up the hill and into the back from the street while orienting the massive unit so as not to obstruct views of the natural landscape.  Setting the Spa  into the ground to reduce its perceived size was not an option, as the cabinet had to be left unobstructed for access to all service panels. Therefore, the decision was made to set the unit half on the patio and half into the landscape which allowed us to use a combination of plantings and planter boxes to soften the sides of the Spa. This achieved the access needed as well as a nice transition into the landscape.

Plantings and Landscape Lighting were the last pieces of the puzzle. Large-scale plantings such as Leyland Cypress, Montgomery Spruce, and Cryptomeria were brought into position on the multi-tiered hill by sheer man power due to the lack of access for machinery. The lighting system was designed to illuminate the weirs of the waterfalls and cast soft light onto the patio from strategically positioned moonlights, while other zones are dedicated to down-lighting the stacked stone wall or illuminating the sitting area under the structure. Lighting highlights the hillside plants in the foreground then gradually diminishes; softening the focus as the perspective travels up giving the illusion that the woodland continues on indefinitely…

By adhering to the client’s requests and working with the environment — not against it — the property was transformed into a sustainable and dynamic space, far exceeding their expectations.